Have any questions?edmund@impactful.todaySchedule a call 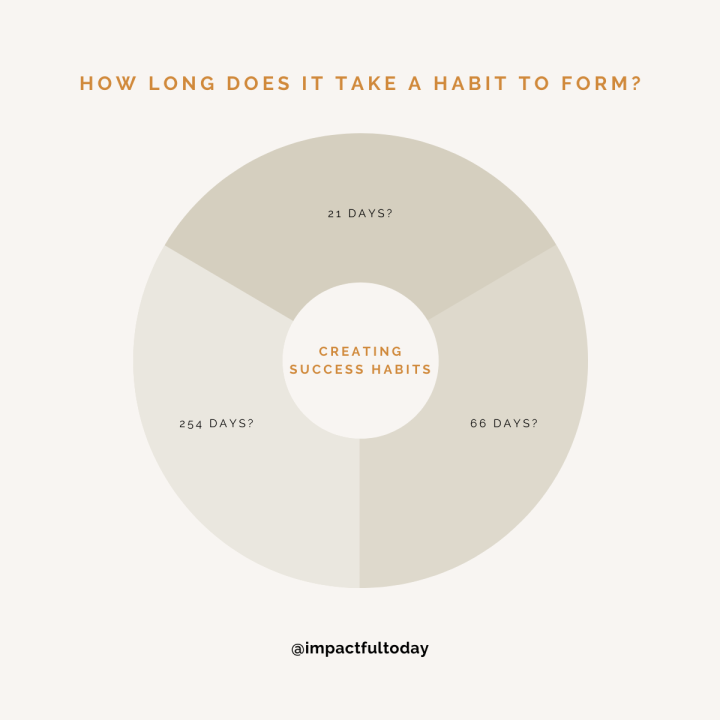 Have you ever driven to work and wondered how you got there? It’s a common thing for people to be in automatic habits and not even realize, which is why I do a lot of work with clients at the beginning to empower them to become self-aware first.

How long does it take for a new habit to form?

66 days is the average according to a study in the European Journal of Social Psychology. Realistically it could be anywhere from 18 to 254 days.

Duke University had carried out research which found that 40% of our actions each day are based on habit rather than conscious thought.

And taking it further, if 40% of your day is spent based on habits, you’d naturally start to wonder then whether your current habits are serving you, right?

Habits have 3 components which are: cue, routine, and rewards (Duhigg, 2016). Identifying what is causing the trigger/reward is useful to break the habit.

For sustained behaviour change, there are two recommended approaches. ‘The first is to turn a new behavior into a habit, that is, behaviour that is executed frequently and automatically.

What I have found personally with clients is that reframing their mindset and working with them to create confidence, empowers them to feel that they can achieve it. This is important because to break away from one habit, it’s important that the underlying reason why they still complete the old habit is identified and reframed (e.g. what is the reward factor that they feel is benefitting them?)

Let’s say you wanted to increase your confidence so you could sell more, yet find that you keep putting off going live on social or posting content, then you’re in a habit. To break that cue you need to understand the reward, which could be escaping the fear of criticism. What meaning does this have for you and what do you associate with it?

Here’s a pause for reflection, if most of your habits are unconscious have you taken any time to analyze your triggers, patterns, and their impacts?

In a study, Milne et al, (2002) found that when a planned intention to exercise was written down 91% of the participants followed through.

Transform Your Sales Game By Changing Your Thinking

Use my calendar booking system to setup a strategy call

Impactful Today's mission is to empower coaches, business owners, and salespeople with training & coaching on confidence, resilience, and EQ to transform their mindset and sales performance.

To learn how Impactful Today can empower you to feel happier, reduce stress, and transform your sales game, just book a free strategy call. You'll learn about the C.L.E.A.R impact model and get a personalised action plan.

Trustpilot rating
4
Goto Top
Copyright © 2021 Impactful Today Ltd. | All Rights Reserved
We use cookies on our website to give you the most relevant experience by remembering your preferences and repeat visits. By clicking “Accept”, you consent to the use of ALL the cookies.
In case of sale of your personal information, you may opt out by using the link Do not sell my personal information.
Cookie settingsACCEPT
Privacy & Cookies Policy

Other uncategorized cookies are those that are being analyzed and have not been classified into a category as yet.

Analytical cookies are used to understand how visitors interact with the website. These cookies help provide information on metrics the number of visitors, bounce rate, traffic source, etc.